Hanoi cultural shows are worth trying to get a closer look at Vietnam countryside life. Check it out - Here comes top 6 best cultural shows in Hanoi, top 6 amazing things to do in Hanoi for not missing in 2020.

Hanoi is well known as the cultural heart of Vietnam, where the history and the civilization of An Nam people have developed for thousands of years. From the rice paddy culture time, this ancient city became the home of art and cultures including poems, literature, music, painting, dancing and many more. The ancient people of this land love cultural activities because it would release the stress and tiredness from the daily agricultural works. Therefore, they considered cultural activities as a daily routine. In the evening, after a working day, people would gather together to sing and dance. Thank those ancient days, the land of An Nam people has grown into a well-developed city of abundance and diversity in cultural activities. After a thousand years of history, the cultures of this land kept growing up and became a general cultural museum of the Ancient Vietnamese people, and now people called it Hanoi. Due to a long period of development, there are a lot of cultural values in Hanoi, that the experts, as well as people, want to maintain and promote for the Vietnamese people and the global tourists. Therefore, we have a lot of outstanding cultural shows in Hanoi to remind people of the traditional cultures of the past. These shows will including dancing, singing, and many other art activities. That is why we strongly recommend you to buy tickets and attend the shows to know more about Vietnamese cultural activities which are considered as the wonders and pride of Vietnam especially Hanoi. In the list, we will not only list down the names of the shows but also the necessary information for you to read and choose the most interesting shows for yourself. These cultural shows will bring you close to the traditional cultures of the S land of Vietnam to know that Hanoi is rich not only by the development, the tourism, the landscape but also the various types of cultures and arts. If you come to Hanoi, read this list and visit some of our suggestions immediately. 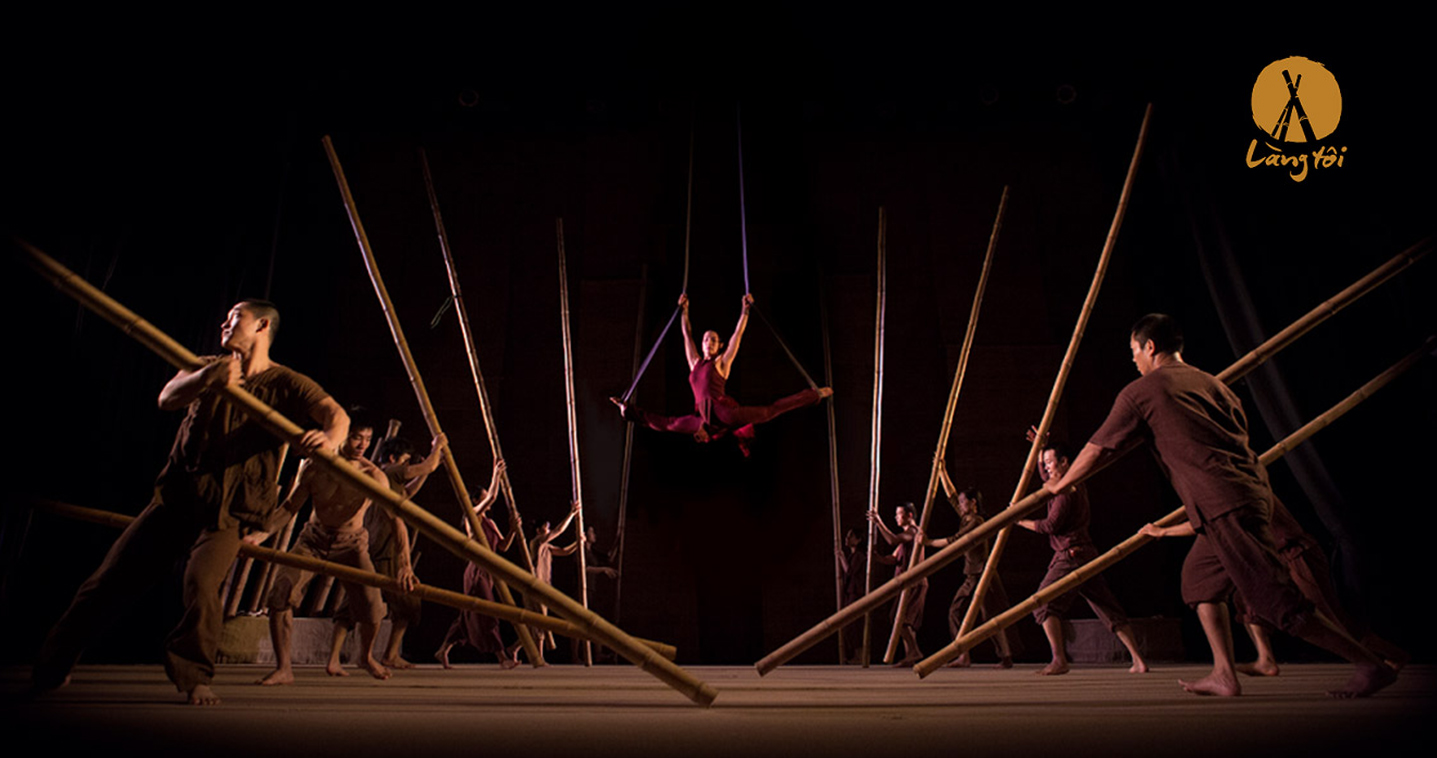 “My Village” Show will impress the audiences by the difficult and sometimes dangerous dances which require the high skills of performers. Therefore, sometimes the audiences will feel like losing breaths when watching the performers do some hard dances. These images also remind us of how challenging Vietnamese villagers had to deal with in their daily lives of the past. Moreover, the “My Village” Show becomes significant and outstanding for its music. The special music of the “My Village” Show comes from twenty different traditional musical instruments, so the sound effects will be lively and real more than ever. The combination of the dances, the images, the performances and also music will stimulate all of your senses. A lot of audiences cannot stop complimenting the show after they enjoy it. This is a super-excellent way to deliver the culture closer to people by performances. Therefore, the “My Village” Show tickets are always sold out very quickly, so if you want to join the show, you need to contact and book tickets very early in advance. With the considerable investment in art and cultural performances, “My Village” Show will be an unforgettable experience for you in Hanoi as well as Vietnam.

Performance time: 18:00 Every Day except for Thursday and Sunday

The name of the “Tu Phu” Show originated from the ritual of going into a trance in the Matriarchy culture of Vietnam. For your information, Matriarchy culture is a tradition of some people who worship the power of women in families. According to this traditional culture, the woman especially the mother is the most powerful and strong leader of a family, and there are a lot of deep stories and histories of this culture. “Tu Phu” is one of many legendary images of this culture. “Tu Phu” Show was created by director Viet Tu after more than 3 years researching and studying Matriarchy Culture. The ideas of building a show about this culture followed director Viet Tu into his dream until “Tu Phu” Show was born with a lot of values, dreams, and passion. Once the ideas of “Tu Phu” Show is finished, director Viet Tu began to build a team and start to process every ideas into reality. “Tu Phu” Show lasts for forty-five minutes including a total of three chapters: “Chau De Nhi” - “ Hoang Muoi Master” - The lady of Thuong Ngan”. The “Tu Phu” Show will excellently introduce the original solemn ritual called “Hau Dong” of Vietnamese people, which will lead the audiences through the history and stories of Matriarchy Culture so that people will feel like they are watching the ritual in reality. 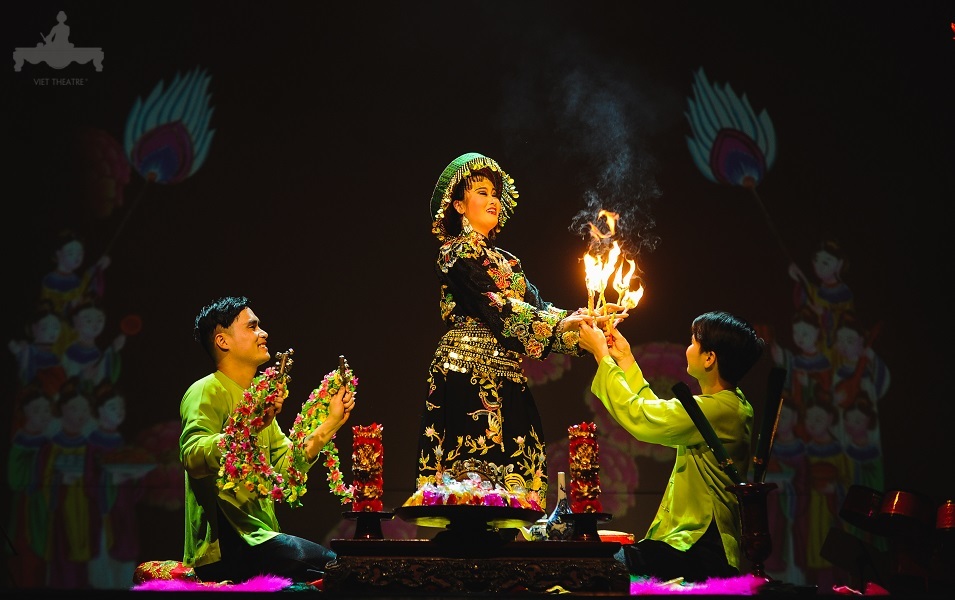 Just like many other traditional shows, director Viet Tu had to prepare and invest a lot in stages, choreography, performers, costumes, music and sound effects. The director needs to combine everything cleverly in order to deliver the best influence to the audiences. Although “Tu Phu” Show is a traditional show, the team of director Viet Tu also takes advantage of using the modern elements to add in traditional ones to create significant visual effects. Because the “Tu Phu” Show does not require many performers so the skills and body languages are very important to express the spirit of “Tu Phu”. In the end, the “Tu Phu” Show is the result of the enthusiastic passion for the traditional culture of director Viet Tu and his team. By this show, he wants to attract more people to care about Vietnamese traditional cultural values such as the “Tu Phu” Show and many other significant cultural performance shows. the “Tu Phu” Show also wants the audiences to know about a beautiful and solemn religion of Vietnamese people, and somehow through the show, the audiences will have the right thoughts about “Tu Phu” as well as the Ritual of going into the entrance in Matriarchy Culture. This culture also becomes the inspiration for many artists in different fields. For example, now we have a song named “Tu Phu” by singer Hoang Thuy Linh. This means that Vietnamese people especially young ones start to pay more attention to the traditional culture of Vietnam. That is what we should be proud of. 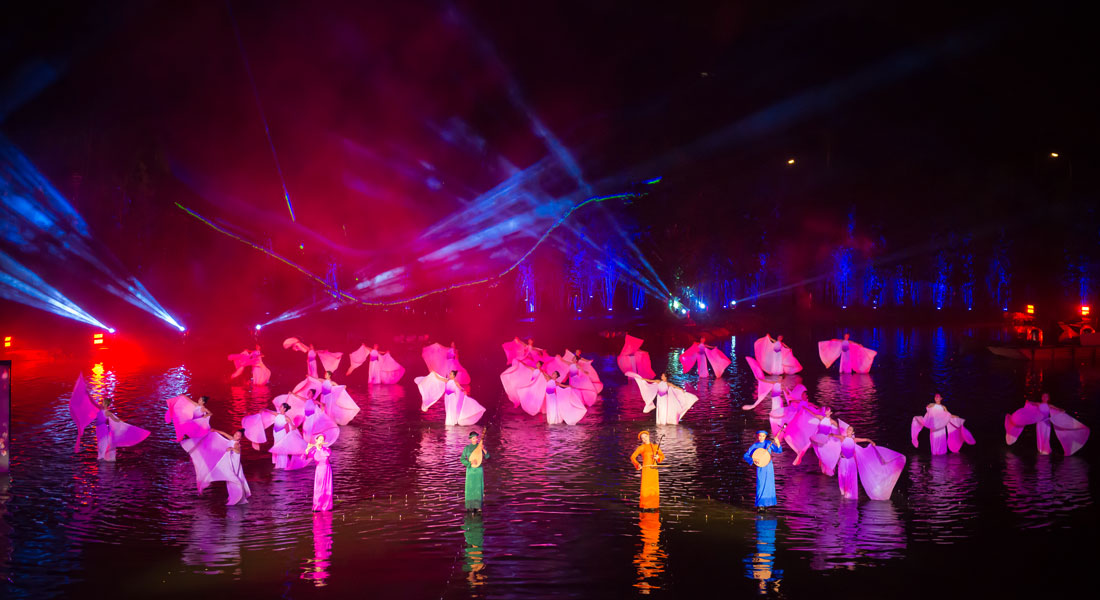 Check now: The Quintessence of Tonkin Show Ticket in Hanoi

or Hanoi: The Quintessence of Tonkin Show with Pick-Up. 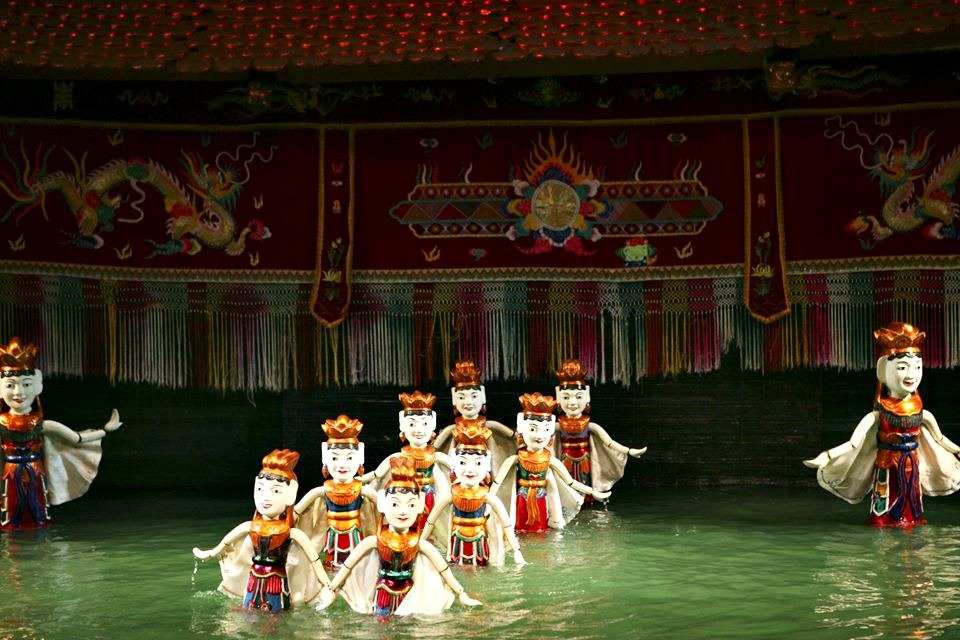 However, in the modern era of technologies and sciences, the water puppetry seems to be forgotten and loses its values since there are not many people want to follow the traditional values anymore. Despite the turning back of people, many artists with great passion and belief have put effort into developing the water puppetry culture in a modern and more interesting direction. First of all, they improve the techniques and skills so that the water puppetry performances will be new and really more than ever. Then they invest a lot of intelligence in developing the stories and concepts. As a result, The Water Puppetry Show now will deliver new stories and new messages in a more significant way to the audiences. The effects of sounds, music, stages are also improved a lot in order to maximize the senses of audiences in the performances. The combination of the traditional instruments, the movement of the water puppets and the high-level skills turns The Water Puppetry Show into a lively image of history and culture in the past. By succeeding in revising the traditional occupation of water puppetry, we provided a lot of jobs for local people as well as maintained the cultural features of Vietnamese people. The Water Puppetry Show is waiting for you at Thang Long theater. Come and visit to witness the development of the traditional culture of Hanoi as well as Vietnam. 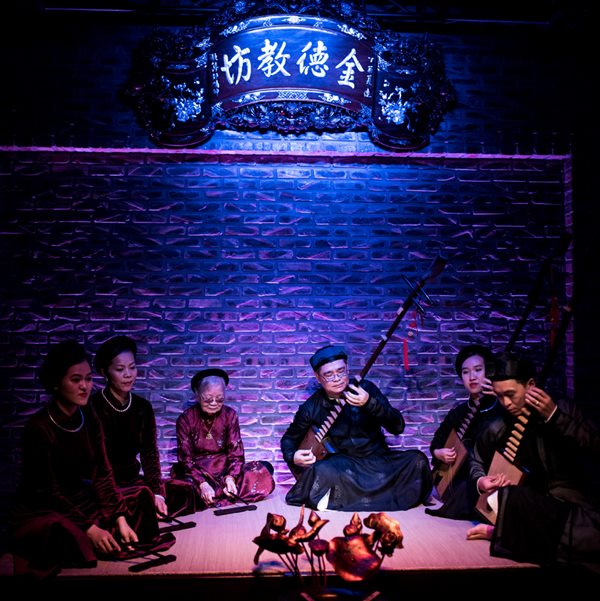 With many years living with this traditional art, Mrs. Kim Duc can tell a thousand stories of happiness as well as sorrow in her career and ceremonial singing development. A lot of difficulties in maintaining this kind of art happened in her life, and sometimes she thought about quit. However, her strong love for ceremonial singing and her family legacy hold her back to keep performing ceremonial singing. All of those memories and challenges now become the souls of her singing. The Phu Sa Lab Show and artist Kim Duc start to have a stable position in the cultural field, and now a lot of tourists attend the show to listen to the amazing Ceremonial Singing Performance. Now, even though artist Kim Duc is really old, but her passion for Ceremonial Singing Performance still like the first days. If you wish to listen to the legendary voice of ceremonial singing, come to Phu Sa Lab show for reality experience now. We hope that in the future, artist Kim Duc, as well as Ceremonial Singing Performance will have students who will maintain the traditional cultural art of Vietnam. 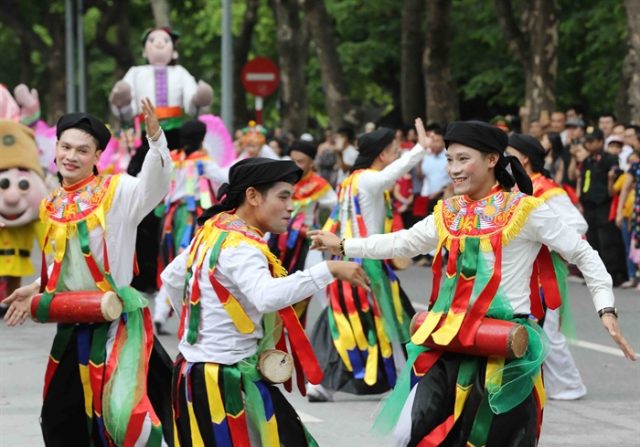 The Traditional Cultural Fair in Modern Time would take place in 3 days from 15th to 17th in November on the walking street in Hoan Kiem district with several small events and activities. Besides, there were a lot of display stands as an exhibition for people to observe and enjoy the traditional art and hand-crafts with strong creativities such as Bat Trang pottery, Van Phuc weaving, Phu Vinh knit, Ha Thai lacquer… all of the magnificent cultural characteristics gathered at this event. In addition, there would also be a lot of cultural performances like singing and dancing during the Traditional Cultural Fair in Modern Time happened. By coming here, tourists could know better about Vietnamese traditional civilization and histories but also tried to create some hand-craft products by themselves. A warm and significant space of the Traditional Cultural Fair in Modern Time had impressed people in the country as well as foreigners, and it was also a memorable milestone for our cultural and traditional values.

In conclusion, these are some of the outstanding features of Vietnamese cultural shows where you can experience the values of our civilization. If Hanoi is famous for the local food, for the amazing and beautiful locations, then Hanoi, as well as Vietnam is also famous for our rich traditional cultural storage of values. If you come to Hanoi, please attend one of the shows we recommended for you, and you will understand why our country is so amazing. Visiting Hanoi will not be interesting without knowing more about cultural shows in Hanoi. Try it now.

For more choices, please contact VieGO or have a look at more options below:

Explore Amazing Ancient Hanoi Like a Local by Scooter